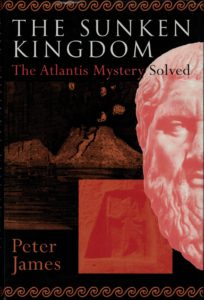 The Sunken Kingdom provides a solution to a mystery which has baffled scholars for nearly 2,400 years – since Plato first wrote about Atlantis in Timaeus and Critias. Written by an outstanding historian and archaeologist, this book takes an entirely new approach. It reviews previous theories, some fantastic, some more rational, and shows why they will not work. Atlantis could not have been in the Atlantic, nor was it the volcanic island of Santorini near Crete, as currently held. Through a careful analysis of the sources, it becomes clear that the story of Atlantis came from western Turkey, where a major Bronze Age city was devastated by an earthquake and submerged beneath a lake.

Here is a work of detective scholarship as controversial as the author’s Centuries of Darkness, which put an overwhelming case for the redating of the ancient world. Besides precisely citing the original Atlantis, the book provides a convincing explanation of how and why the destruction of the city grew into the story of a ‘lost continent’.

Introduction (from the book)

Nearly 2,400 years ago the Greek philosopher Plato posed a riddle which has baffled scholars ever since: was his story of the lost continent of Atlantis a complete fabrication, or did some historical reality lie behind it?

The possibility of a real Atlantis, in the terms that Plato described it, has long gone. For all its romantic appeal, the idea of a prehistoric super-civilization on an Atlantic continent is vanishingly unlikely. So was Plato simply writing science fiction? The sheer scale of everything he said about Atlantis might suggest so – from the grandeur of its buildings to the enormous timescale involved. Atlantean civilization, according to Plato, began even earlier than that of the Egyptians. On his chronology, Atlantis flourished about 10,000 years ago, before it vanished in a single night of earthquake and flood.

This information Plato claimed to have received through his family, which had preserved it through several generations from the great Athenian statesman Solon who supposedly collected it during his visit to Egypt in c. 565 BC.

The improbability of Plato perpetrating a complete fraud, involving deceased members of his family and the revered Solon, has led many to assume that there must be some substance to these claims. While Plato always added his own slant to traditional material, he has never been shown to be guilty of wholesale fabrication. As the possibility of an Atlantic Atlantis became geological heresy in the 1960s, some scholars turned to the idea that the story was a memory of the glorious civilization of Bronze Age (Minoan) Crete. The explosion of the volcanic island of Thera (Santorini) about 1500 BC was argued to have provided the mechanism both for the destruction of the Minoan civilization and for an Egyptian belief in a lost kingdom ‘to the west’.

Under close analysis, however, this theory breaks down. Plato described a catastrophe involving earthquake and flood, yet the Thera event was a volcanic explosion. The Greeks were reasonably informed about ancient Cretan civilization – as echoed in the stories of Minos, Theseus and the Minotaur in the Labyrinth – so it seems unlikely that they would have, first, learnt about Crete from the Egyptians, and second, not recognised what their source was ostensibly describing. It also became clear by the 1980s that the explosion of Thera did not, after all, bring about the end of Minoan civilization. It was time for a new approach to the Atlantis problem.

Most theories about Atlantis have been constructed by believers, who have identified its ‘real’ site in myriad locations from the British Isles and Greenland to Carthage and Thera. On the other side are the sceptics who have dismissed the search for Atlantis as futile. Many years ago I decided that the only way forward was to suspend any naive hope of finding a ‘real’ Atlantis, and to concentrate instead on the key question: can we identify a source behind Plato’s claims? It had an unexpected bonus.

The crux of the problem is the supposed Egyptian connection. The ancient Egyptians took a dim view of foreigners and the idea that they preserved a detailed tradition describing two remote civilizations – Atlantis and its rival Athens – is highly improbable. Even more far-fetched is the idea that the Egyptians, who took pride in being the ‘oldest’ civilization, could have recorded events which took place a thousand years before their own beginnings.

Alternatively, is it possible that Plato was right that Solon gathered the story on his travels, but mistaken in assuming that this was during his famous visit to Egypt? Solon travelled elsewhere, notably to the kingdom of Lydia in western Anatolia (Turkey). There, at the court of king Croesus – proverbial for his riches, but historical nonetheless – Solon is said to have swopped stories not only with the king, but with the great fable-writer Aesop.

It was to Anatolia that many other clues began to lead, beginning with Atlas, the famous Titan of Greek myth who was condemned to the edge of the world to support the skies when his race was defeated by Zeus and the Olympians. Atlas, Plato tells us, was the first king – and eponym – of Atlantis. Analysis of the myths surrounding Atlas and his family suggests that the Greeks believed that his ‘home’, before he was banished to the west (i.e. the ‘Atlantic’), lay to the east and that the Greeks may have learnt the idea of the sky-supporting giant from that quarter. This is confirmed by a mass of pictorial and literary evidence from the Hittite civilization of Bronze Age Anatolia, which provides exact parallels to the classical Greek concept of Atlas.

It was a short step from there to see what the classical traditions of Anatolia – and in particular Lydia – had to say about the ‘original’ Atlas. Classical scholars have long accepted that another mythological figure, Tantalus, is essentially a Lydian version of Atlas. Tantalus, too, crossed the Olympians, and was condemned to an eternal torment which gave us the word ‘tantalise’. In the version given by Homer his punishment was everlasting hunger and thirst, but the more common tale was of a rock which perpetually swayed over his head. Other versions say he was attached to the rock, that he was condemned to support it and that the ‘rock’ was the sky itself. And Tantalus, like Atlas, is once thought to have ruled an earthly kingdom. When Tantalus was struck by Zeus’ lightning for his sins, the city he founded was shattered by an earthquake and drowned beneath a lake. The name of his city was Tantalis.

I could have stopped with this bizarre mixture of cosmological myth and local tradition. There was already enough circumstantial evidence to vindicate Plato’s claim that he had not invented the Atlantis story. His putative source, Solon, could have picked up in Lydia the story of Tantalis which had all the key elements for its later exaggeration into Atlantis – from its fabulous wealth and transient empire to its catastrophic transformation into a ‘sunken kingdom’. As Tantalus was identified with Atlas, the scene could have been mistakenly transferred to the far west, the location of Atlas after his downfall. Once in the Atlantic, the story of the ‘sunken kingdom’ could grow uncontrollably during its retelling through the generations from Solon to Plato.

However, I was tempted to go further: could the site of the legendary Tantalis be located, and did such a place ever exist? Clues from classical writers such as Pausanias made it clear that Tantalus’ lost city was believed to lie near Mount Sipylus, modern Manisa Dagh, twenty or so miles inland from the modern port of Izmir (Smyrna) on the Aegean coast. Classical writers describe Tantalis/Sipylus not only as the original capital of Lydia, but as the ancestral seat of the Mycenaean kings. Substance was given to this by a lengthy text from the archives of the Hittite Emperors, composed about 1400 BC, describing the troubles they had with a vassal ruler from a western vassal in league with the Mycenaeans. His seat, ‘the mountain land of Zippasla’, can be reasonably located in Lydia, and identified with Sipylus. Slice by slice, the ruler of Zippasla (Madduwattas by name) swallowed up all the smaller states of western and southern Anatolia and even challenged Hittite authority in Cyprus. How far the men from Zippasla got is hard to say – but Hittite authority was only properly re-established in Anatolia some fifty years later.

If the kingdom of Zippasla lay at Sipylus, where was its capital? Here history, archaeology and legend seem to converge neatly. When I went to Turkey in 1994 it was not too difficult to locate the site of legendary Tantalis. Until about thirty years ago there was a small lake just to the north of Mt Sipylus and a few miles away from a magnificent (and almost undatable) rock-cut tomb which Pausanias described as ‘the by-no-means inglorious grave’ of king Tantalus. A hundred and fifty years ago the lake was much bigger, and I was pleased, after doing the initial groundwork, to find that 19th-century scholars, including Sir James Frazer, had already identified it as the spot where the ancients believed the lost city lay submerged underwater. As the location for a real city, it would be hard to improve: it lies on a fertile plain between the ancient caravan route skirting the mountain and the river Gediz, main artery of Lydia. Yet we are not reliant on merely theoretical considerations. Three hundred feet up the mountain-side a thirty-foot sculpture of a Mother Goddess gazes out over the very spot where Tantalis was thought to lay. Pausanias claimed that it was carved by the son of Tantalus and that it dates to the Late Bronze Age is undeniable – from its style and from the Hittite hieroglyphics which were incised into the carving about the 13th century BC.

It would be strange to imagine that this unique sculpture was not prepared for the worship of a highly organised community, settled in the plain below. For this, and a host of other reasons, I am happy to believe that here there was once an important Late Bronze Age centre. Most likely it was the Zippasla of the Hittite documents and almost certainly it was the Sipylus or Tantalis of classical texts. For its fate we only have the traditions to go on, but the belief that it was totally devastated by an earthquake is not outlandish. The Izmir region, as travellers to Turkey will know, lies in one of the worst earthquake zones of the world, while the appalling damage suffered by the cities of Lydia during the great earthquake of AD 17 is well documented. Hopefully excavation will one day determine whether a Bronze Age city at Mt Sipylus – like the Atlantis of legend – was really destroyed by an earthquake and consigned to a watery grave.

Other books by Peter James

In the USA: order from “British Books@American Prices“.